Little is known about the Tyrolese maker, Mathias Alban of Bozen. That’s Tyrolese, not Italian. It is not known who taught him – there have been several guesses – but sometimes his varnish suggests that he might have been trained in Italy.

Before World War I, the Italian town of Bolzano was part of the Austro-Hungarian country of Tyrol. It was called Bozen. The population spoke German. Bozen did not become Italian until 1919, when it was annexed by Italy at the end of the first World War. At the time of its annexation Bozen had a population of 30,000 German-speaking people.

In the 1920s the city, along with the rest of the province, was subjected to an intensive Italianization programme under orders from the fascist government of Benito Mussolini. The German language was banished from public service, German teaching was officially forbidden and German newspapers were censored with the exception of the fascist Alpenzeitung. The regime massively favoured immigration from other Italian regions. The aim was to outnumber the local German-speaking population by tripling the population with Italian-speaking immigrants drawn from the old provinces.

Mathias Alban was born on the 28th March 1621 in St. Nikolaus in Kaltern, close to Bozen. Both places were part of the Holy Roman Empire at the time, for this pre-dates the formation of Austro-Hungary, which took place in 1867. He died on the 7th February 1712, according to most authorities, in Bozen – still in Austria. That’s a very long life, and it used to be thought that there were two makers of the same name, father and son. George Hart, writing in 1875 states that the father’s work “is somewhat like Stainer’s, but higher and heavier in construction.” He then goes on to say that the son “has shown but faint marks of having been tutored by his parent in the art of violin-making.”

He is considered (in older textbooks) to be second only to Stainer in importance in the Tyrolese school of lutherie. Fridolin Hamma, as recently as 1948 , included Mathias Alban in his book on German violin makers.

Italian violins, though, are far easier to sell, and far more expensive than Tyrolese examples. Since the early 19th Century, therefore, Alban’s original labels have been removed and fake labels, in Latin, have been inserted. By 1850 most books about violins refer to him as “Matthias Albani” – a rather curious mixture of Germanic given name and Italian surname. And since 1919 frankly Italian labels have been put in. This accounts for the astonishing variety of labels illustrated in the textbooks – at least a dozen different examples are illustrated in the common dictionaries of violin makers, and I found nine more in old auction catalogues. All these labels are completely different – some are printed, some are written in ink. Those that are printed have completely different fonts. Those that are written have completely different handwriting. They’re all fake, of course. Genuine labels from this maker might well have been in German, in common with the labels of most other contemporary German-speaking makers, and less likely to have been in Latin.

I can remember selling a violin which was considered to be by this maker at auction, and which was described as Tyrolese. It had a label inside: Matthias Alban, geigenmacher in Bozen. I saw it again a few months after the sale, now described as an Italian violin, and with a label which read Matteo Albani fece in Bolzano. Now that’s just silly. 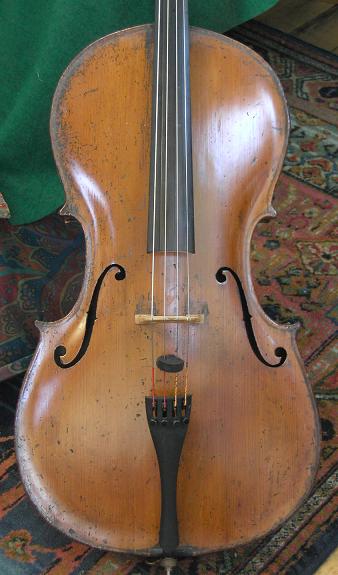 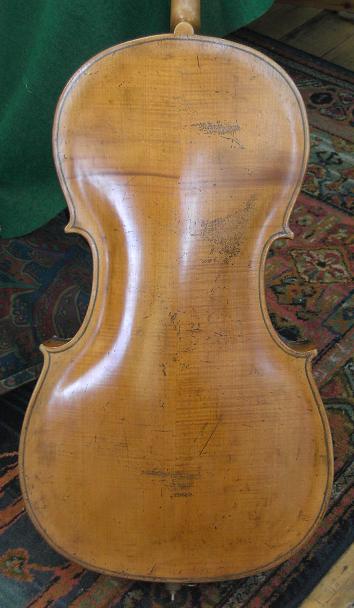 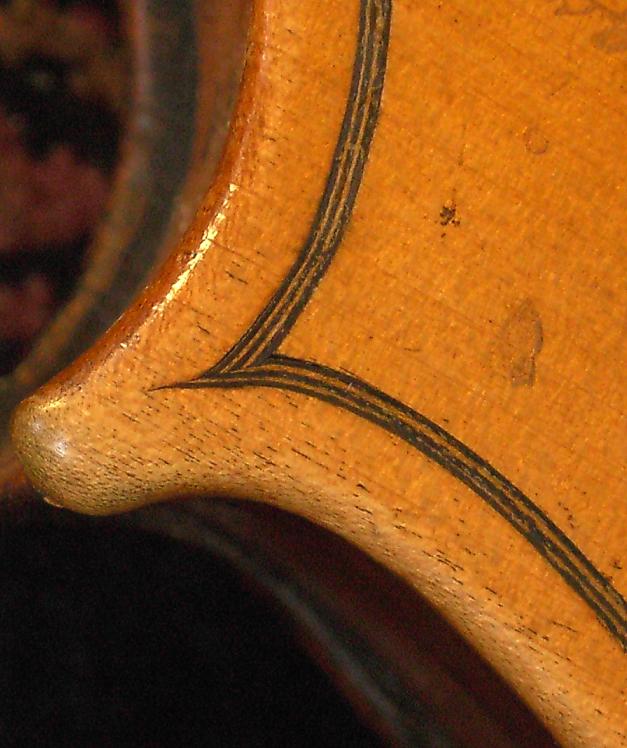 Welcome to WordPress. This is your first post. Edit or delete it, then start writing!

There was a time when it was essential for upper and middle class women to be able to dance. Hard to imagine now, but for most of the 18th century European society would know exactly what was expected, and more prosaically where to put its legs, if the band struck up a bourée, or a rigaudon, or a forlane, or half a dozen other dances.

There were dancing teachers, of course. In fact it was not an uncommon profession, for the demand was urgent. They had to be able to play the music and demonstrate the dance steps. This required a small instrument; in fact a pocket-sized instrument. It was also necessary for it to be very quiet: houses were crowded, and not everybody needed dancing lessons. 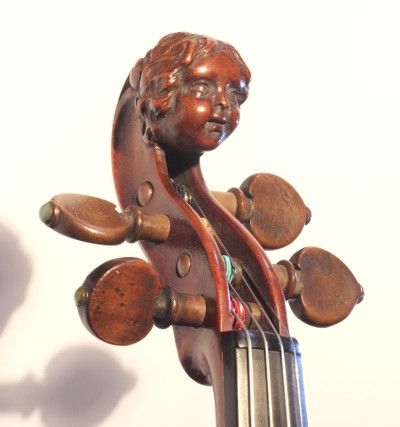 The Dancing Master’s Kit, or Pochette, fitted the bill perfectly. The strings are roughly the same length as those of a violin, and similarly tuned, so any fiddle player can use it. Having such a tiny soundbox means it can never be noisy. The term “Kit” tends to be used by the English: “Pochette”, a French word, was used in mainland Europe. In modern usage pochette can mean a wallet, but it’s any small pocket.

Inexplicably, there was a rush of fakes that flooded the market in the 1990’s. They were superficially convincing, but were generally easy to spot because the details were incorrect and because of indifferent workmanship. This isn’t one of those. Incredibly, the very narrow purfling around the edge of the table is not painted on, but is actually inlaid. It’s just a single strip, but it really does protect the front from creeping edge cracks.

The back is in two pieces, which is rather unusual. Such small instruments tend to have one-piece backs (the fakes always do) and quite commonly the backs and sides are all carved out of one bit of wood. The back here is of beech, with an obliquely-cut knot at the bottom. Because the two halves are matched the knot appears heart-shaped.

There’s a repaired crack through the knot, because it’s structurally weaker here and because this is, after all, perhaps over three hundred years old. This has proper ribs, and they are of plainer beech. The table is of wide-grained pine. Neither the front nor the back have any overhang: they are flush with the ribs. Well of course they are: there’s less to get snagged when taking it out of a pocket. The ebony fingerboard is of a later date, but the ivory saddle and end-pin are probably original.

I’m unhappy with the pegs. They have what looks like teeth-marks on them. This is perfectly OK. When pegs become hopelessly jammed people do sometimes use their teeth to grip them, but these marks are too regular, and look intentional. The pegs are later.

Now . . . where did it come from? Pochettes were made all over Europe.

It isn’t English. It’s festoon outline discounts that, as do the soundholes and head. At first the head looks French. It’s an odd mixture of adult hair-do with baby’s face, and similar finials can be found on some pardessus-de viole and larger viols, also quintons and occasionally violins. However most of these have running decoration along the outside edges of the pegbox, whereas this is plain. Some makers from Prague made similar finials – Hulinzky, for example. I’m sure it’s not Italian. Italian pochettes tend to be of the straight-sided variety, and their pegboxes are not like this. I don’t think it’s Flemish either. I suppose there must be exceptions, but I’d expect a Flemish pochette to have soundholes shaped like the letter C. 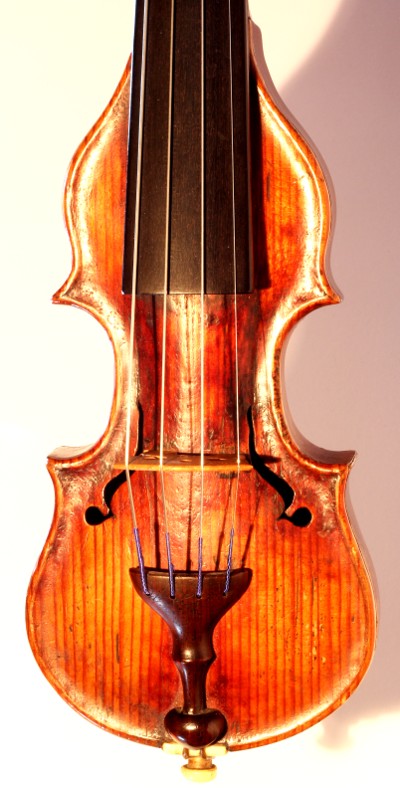 I reckon it’s Bavarian. The varnish looks Bavarian – Augsburg perhaps, or Nuremberg. The soundholes are squeezed within the outline, but being vaguely flame-shaped are more likely from there or from further east, for example Vienna. These soundholes are quite strongly similar to those of a maker called Ernst Busch, who worked in Nuremberg in the mid-17th century. Well, perhaps it is that old. Also the very architectural tailpiece, which I think is pearwood, may well be original and is, to my eye, more Germanic than anything else.